Our history is rich with a diverse range of unmanned radio-controlled contraptions from hydrogen filled model aircraft used for theatre act entertainment in the late 19th century to the state-of-the-art military grade drones with a global reach. The first pilotless aircraft designed and tested by the Royal Aircraft Establishment of Britain in 1920s, the Larynx, had a range of 100 miles. In the 1930s the British developed the Queen Bee, which was an unmanned radio-controlled aircraft used as a gunnery target. Radio controlled systems for model aircraft were developed the 1940s and 1950s and were popularized by British enthusiasts such as the Howard Boys.[1]

The use of UAVs or drones for military purposes grew beyond target practice and expanded into reconnaissance during the Vietnam War, used as decoys in combat and for leaflet drops in propaganda and psychological warfare operations. The Teledyne Ryan AQM-34L flew 68 missions over north Vietnam before being shot down. More recently the Predator, which 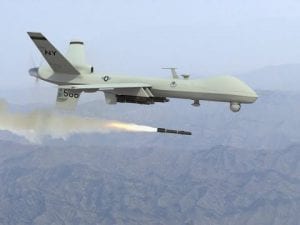 performed its first kill operation by the CIA in February 2002 in Afghanistan has played an integral role in the execution of numerous successful operations. The most recent publicized strike was the targeting of Soleimani by the MQ-9 Reaper, AKA Predator B developed by General Atomics. 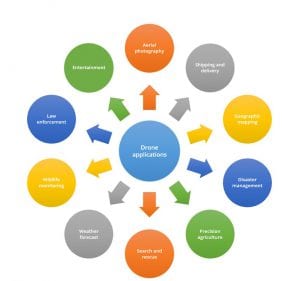 Drone technology has extensive uses in commercial markets and has a multitude of applications. Law enforcement uses drones for border monitoring, crowd management, coastal surveillance to track and investigate drug smuggling and human trafficking operations. Fire departments and first responders track wildfires, locate and drop supplies to lost individuals and surveil the effects of natural disasters. Land management services map geographies and manage agriculture with the use of thermal imaging to determine crop health. Major companies in shipping and distribution are investigating the use of drones for delivery services. Drones have even found their way into entertainment with spectacular aerial illuminations at large scale events displacing tradition firework displays. 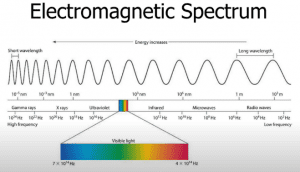 Although drones have evolved in many ways both physically and in their application, advancements in the communication link is the driving force behind this evolution. The communication link is possible by the manipulation of electromagnetic waves, either by modulating the frequency and or amplitude of the carrier frequency. The EM spectrum covers frequency 102Hz to 1014Hz, including visible light (Figure 5). EM waves are produced by applying an electromotive force to a conductor at specific frequency or wavelength causing free electrons to move (current). This movement induces a magnetic field around the conductor and based on the structure and position of the ground plane will radiate this energy into free space (Figure 6). Ideally the radiating structure (antenna) should be a minimum of a quarter wavelength. The shape of this radiating pattern can be designed to focus energy in specific directions or beams.

Some of the tradeoffs between frequency selection are physical size of the antenna and electronic components, data rate requirement, and atmospheric attenuation. Atmospheric attenuation increases with frequency as does resolution and data rate, so as the operational distance increases you can either lower the frequency or increase transmit power. All of these parameters are considered when designing the link budget. The link budget consists of the type of modulation, encoding technique, data rate, distance required, path obstructions and fading. 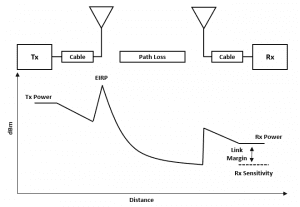 The challenge with any system as it relates to performance and maintenance is dealing with corner cases and upgrade cost.  You might have a situation where you need a little more margin in special use or emergency situations. Or more specifically, upgrading fielded equipment to comply with system improvements or modifications that require switching out the antenna and or increase transmit power to comply with new modulation waveform. This situation often occurs with military grade drones and or aircraft where additional requirements are imposed on existing equipment. In these situations, there are options available in the form of Bidirectional Amplifiers (BDA) and Power Amplifiers (PA) (Figure 8). 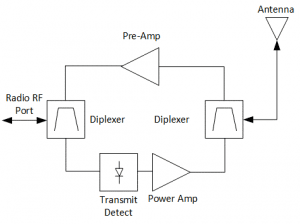 BDA’s essentially mirror the frontend section of the radio and can be tailored to optimize the link budget. An example of the link margin improvement associated with integrating a BDA into a typical radio system can be seen in (Figure 9). The results indicate a link margin improvement of 14dB essentially a 4x increase in system range with similar throughput. Either devices can be installed in-line anywhere between the RF port of the radio and antenna or integrated into the antenna housing as a module.  Parameters to consider in the receiver section are gain, linearity and noise figure and in the transmit section, output power, saturated power and filtering.  Additional considerations are power management, as it relates to consumption and dissipation, whether the system is full or half duplex, does the BDA or PA need to have transmit sense detect? As you can see BDA’s are extremely versatile and very useful for enhancing existing systems. Other consideration that should not be overlooked is power management.  There are three main factors that determine performance, power consumption, peak current and thermal management. Power consumption depends on all sources quiescent current of the pre-amp and PA; PA current consumption during transmission and power supply efficiency. 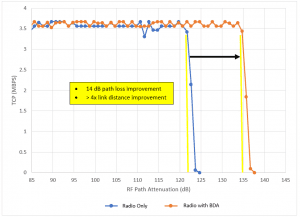 Besides completely shutting down the BDA the pre-amp quiescent current is unavoidable, however the PA can be managed by transmit detect circuitry. The PA is kept in pinch off or completely shut down until a signal is detected at the input of the transmit chain. However, implementation of this approach depends on the system response time and whether there is a preamble. Amplifier class will also determine efficiency, such as class B or AB, class B being more efficient since there is no bias current until the input signal is large enough for the device to conduct, this many not be tolerable due to the amplitude / phase distortion caused by this discontinuity. 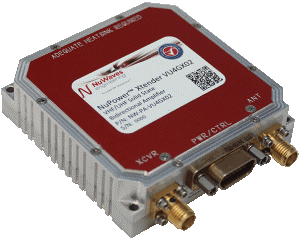 Class AB requires some bias current with little to no distortion depending on bias current. There are other configurations that can also be implemented such as Doherty topology where the two amplifiers are in parallel, one for lower power operation (carrier amplifier) and a second for higher power (peaking amplifier). This gives the designer flexibility to better manage quiescent bias for each device, thus reducing total current consumption.

NuWaves is playing a critical role in this industry by providing cutting edge broadband, bidirectional power amplifiers, filtering systems, link budget analysis and is well positioned to address this market. 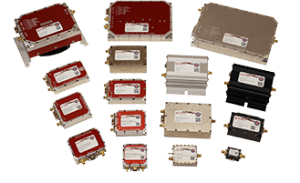 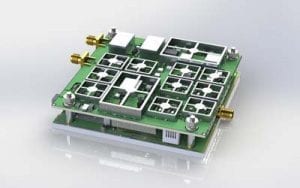 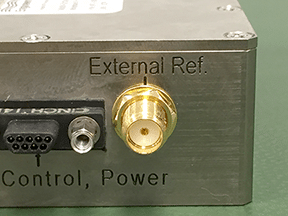