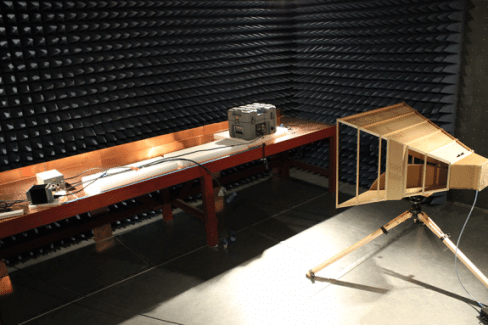 The Department of Defense (DoD) purchases a vast array of electronic and electrical devices that must be integrated into various platforms with many other devices and function without degraded performance (electromagnetic susceptibility), and conversely, must function without causing degradation of performance for other devices (electromagnetic emissions). Similarly, electromagnetic interference (EMI) is a commonly used term that describes the phenomenon of electrical devices being susceptible to disturbance from EM emissions.  EMI can propagate either through solid objects (conducted), or through free space (radiated). For testing of the conducted EM radiation and the radiated EM radiation the DoD established a series of tests known as MIL STD 461. These tests are critical requirements for DoD contracts because they are equally critical for performance and reliability on the battlefield. So proven and relied upon are the DoD’s electromagnetic standards, MIL STD 461, that other federal agencies and even private industries have referenced and utilized the standard. Figure 1: To complement the state-of-the-art Production and Engineering capabilities, NuWaves has invested significant resources to develop their Engineering Validation Testing, Environmental Testing, and Qualification Testing, including an Anechoic Chamber.

The MIL STD 461 is composed of about twenty different tests that can be categorized into four different sections. Radiated Emissions (RE) is testing that measures the EM radiated emissions of the device under test (DUT). Radiated Susceptibility (RS) subjects the DUT to radiated EM radiation. All radiated testing requires antennas to receive and transmit the EM radiation. Conducted Emissions (CE) is testing that measures the conducted emissions of the DUT. Conducted Susceptibility (CS) subjects the DUT to EM radiation directly through a conductor. All of the various tests have limits unique to the particular branch of the Department of Defense, platform, or a custom specification chosen by the procuring activity.

Testing of MIL STD 461 must be conducted in a highly controlled electromagnetic (EM) environment known as an anechoic chamber. Anechoic simply means non-echoing and, for this application, should not be confused with acoustic anechoic chambers. Radiation emitted off of the device under test (DUT) will be absorbed either by the pyramidal RF absorber, for the electrical field, or ferrite tiles, for the magnetic field. The effect of the anechoic chamber is a very low noise floor for the spectrum analyzers and dampened reflections so that the RF energy will only be received/transmitted from the main lobe of the test antenna. In addition to material of the chamber, there are dimensional requirements and lengths to ensure consistency between tests.

Design engineers who desire to bring optimal value to their customers are always balancing designs between over-engineering and not meeting specifications required on a given contract. NuWaves Engineering can maximize your RF capability and readiness by designing electronic devices, simulating electronic designs, assembling the designs, and conducting MIL STD 461 tests on the design.  From there, NuWaves can assess if a redesign is truly merited, tweaking on the present design, or continuing on with finalizing the prototype, all within a short schedule while meeting specifications. This results in the customer getting a more competitive price for compliant military grade engineering. This is possible due to NuWaves Engineering offering a full spectrum of solutions from concept to production.